Spires are handcrafted, prominent pieces that add a distinct blend of culture and heritage to your project.

Our spires have a hollow base and can be modified to receive cable for lightning rod core systems and are available in a wide variety of materials. Pick from our classic options or we will fabricate to your specifications.

A finial is an element marking the top or end of some object, often formed to be a decorative feature.

What is a Finial

A finial is an element marking the top or end of some object, often formed to be a decorative feature. In architecture it is a decorative device, typically carved in stone, employed decoratively to emphasize the apex of a dome, spire, tower, roof, orgable or any of various distinctive ornaments at the top, end, or corner of a building or structure. Where there are several such elements they may be called pinnacles. Smaller finials in materials such as metal or wood are used as a decorative ornament on the tops or ends of poles or rods such as tent-poles or curtain rods or any object such as a piece of furniture. These are frequently seen on top of bed posts or clocks. Decorative finials are also commonly used to fasten lampshades, and as an ornamental element at the end of the handles of souvenir spoons. The charm at the end of a ceiling fan pull chain, or a lamp pull chain is also known as a finial.

During the various dynasties in China, a finial was worn on the top of the hats civil or military officials wore during formal court ceremonies. The finial was changed to a knob for other daily usage (including semi-formal ceremonies). 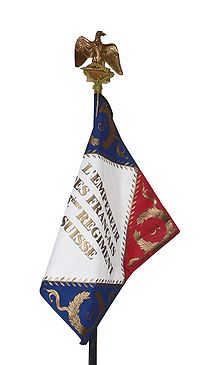 Eagle of a regiment of the Grande Armée

A "ball-style" finial is often mounted to the top of a stationary flagpole.[1] The United States Army, Navy, Marine Corps andCoast Guard employ a variety of different finials depending on the flag in question, the Marines and Coast Guard deferring to the Navy's protocols.[2]

Flags of Greece and Cyprus being flown on flagpoles with cross finials in front of Agioi Anargyroi Church, Pafos.

Bed posts often end in finials. Wooden posts tend to have turned wood finials.[3] While the purpose of finials on bed posts is mostly decorative, they serve a purpose on curtain rods. They provide a way to keep a curtain from slipping off the end of a straight rod.[4]

Curtain rod finials can be seen to act much like a barometer of public taste. Many designs hark back to the gothic and neo-gothic of architectural finials, while other contemporary finials reflect minimalist, art nouveau and other traditional styles of décor. The use of different materials is as wide as the range of designs with brass, stainless steel, various woods and aluminium being employed with a variety of finishes such as ‘satin steel’ and 'antique brass'. The durability, strength and machinability of modern alloys have lent themselves to increasingly intricate and dazzling designs.

Some lampshades or light fittings, especially in glass, typically terminate in a finial which also serves to affix the shade to the lamp or fixture. Finials are twisted onto the lamp harp. Typically the finial is externally decorative whilst hiding an internalscrew thread. There are several standard thread sizes which are used.